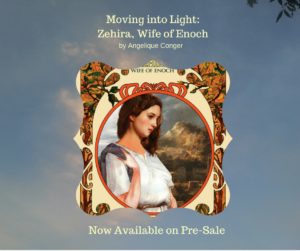 I have been swamped the past weeks writing, editing, and preparing for the launch of my newest book, Ancient Matriarchs Book Four, Moving into Light: Zehira, Wife of Enoch. Now, it is available on Amazon for Pre-Sale. It would be an understatement to say I am excited!
I’m doing more to share this book than I have the others. Thursday, throughout the day, I’ll be checking in promoting it on a Live Facebook Event, Moving into Light Book Launch Party. I have games and questions, stories to tell, and excerpts to read. I think it’ll take most of the day, so check in when you have time. Everyone who responds with a comment, likes, shares, or participates in a game, will be put into “the hat” for one of the prizes I’m offering. (Watch the event page for the list.)
Go ahead and start sharing now, I’m collecting names of those who do and putting them into my “hat” to be considered for prizes.
I hope you choose to join me sometime during the day. 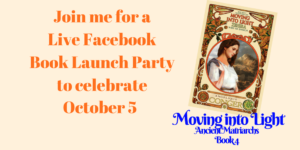 In other news, I am participating in a Book Funnel Giveaway: October Historical Fiction. Along with other authors, we are sharing a variety of fiction with historical fiction as the connector. Some are romance, others mystery, there are 18 authors and 19 books. See if you can find mine. You can find the Giveaway here.
Happy Reading.

This last two weeks have been hard for me. No, no problems with rain or snow. Lucky me, I live in the desert southwest. Instead, I’ve been fighting my own personal demons.

Have you ever worked hard on something personal to you, and then, when it is time to share, held back in fear? I have.

I have worked over two years on my first book, writing and rewriting it. I’ve had others I trust read it and worked to make it as good as I know how. Now it’s time to edit.

I found the courage to find editors who gave me sample edits and hired an editor. I sent it off.

And now. Now I’m frozen in fear. Will it be good enough? Will I need to rewrite it all again? Are there big problems with it?

Other rough drafts need to be worked on, so I can have more than one book available for you to read. I have such big plans. But this past week I’ve been frozen in fear, unable to do very much.

I’ll get past it. I’m strong, and my other books will be written. I’ll survive the edits, rewrite again, and again, if necessary, so I can have the best book I can write for you to read. This book and all the others I have planned.

Eve must have had days of fear. Many times she could not stay frozen long, for if she didn’t do the work, it would not be done. I think of her now, and take courage. Onward.

When do you become frozen? How long has it held you back? Share with me and give me hope.

It is November again. Three Novembers ago I was working on my first ever rough draft of a book. Before then, I wrote poetry and very long letters. I took a creative writing class in college, where I started a novel. I wrote one chapter. Since then,

My sister has been working on writing fantasy novels for several years. I’ve watched her, and wished I could. She heard of National Novel Writing Month (NaNoWriMo), which happens each November, and invited me to join her three years ago. The goal is to write 50,000 words in the month of November. You just write, not worrying about corrections.

What would I write? One of the stories I tried to write before was the story of Eve. I have often wondered how she managed to give birth alone, just her and Adam. How did they figure out how to live in a new world? These and other questions filled my mind for years. I realized I had been taking the wrong point of view. Thus, I began to write.

If you write every day, you have to write close to 1700 words each day to write 50,000 words in 30 days. I had things to do on Friday and Saturday, and took the Sabbath off. Each year we go to my parent’s home two hours away for Thanksgiving, and my birthday is at the end of the month. My goal was to be finished before Thanksgiving, so I could spend time with my family and not have to worry for my birthday.

I finished the 50,000 words that Wednesday before Thanksgiving. Not the book, it took another six weeks to finish the first draft, all 100,000+ words of it. Then I began the rewrites. I’ve lost track of all the times I’ve gone through it. I’m finally ready to send it to an editor. I decided to write a serial, and shorten the book about Eve. It is now the first of the series, Ancient Matriarchs: Eve, First Matriarch.

In the two years since that first NaNoWriMo, I’ve completed the rough draft of two others. Last November I wrote about Enoch’s wife, this summer I wrote about Seth’s wife, and I’ve started a side series that came from the writing of that first rough draft: Lost Children of the Prophets. My husband will tell you I spend nearly every extra minute writing. I’ve found once you start, once you actually get through a rough draft, it becomes almost addictive.

It’s November again, and I’m working on the rough draft for a new book, book 3 in the series about Enos’s wife. After this month, I’ll have the rough drafts, and more, of the first four books of the series. My goal is to have at least the first three ready to publish by the end of next year. The story of the wife of Noah will finish the series, and is the only one without anything written.

Eve, First Matriarch is ready to go to the editor. I’ve talked to my artist about the cover. Watch for it to be ready soon. I haven’t published books before, so I won’t suggest a time frame, just sometime next year. Watch for it and the rest of them.

If you have an idea of what you think might go into these books, or a suggestion of a name for Noah’s wife, please comment.

Even authors of fiction find a need to research for their work. As I have been writing for nearly two years, I have found many things I don’t know. I thought it would be easy to write about ancient times, imagining what life may have been like in those earliest years of our planet. So little is written about those days, most of it must be imagined, or so I thought.
Then I began to write and found I needed help. I had no idea how they used fire, or made unleavened bread, or tanned hides, or other things. I went to the web, searching. I found the answers to these and other questions. It’s wonderful to have the Internet to do research.
Did you ever have to use the card catalog or the magazine indexes? I did. Research only happened in libraries, with books and magazines. Never as easily as now, with computers and the Internet.
I found some amazing things, and some even went into my book.
Fire was used for heat and cooking, as you would expect. It hardened wooden tools and kept wild animals away. They say early people used fire to drive animals in the hunt, drive bees from the hive, and grasshoppers into cooking pits. Fires were used to clear away growth to find bulbs for food and brush to ease travel, and promote seed growth. Heat from the fire straightened or bent weapons as well as breaking stones for weapons.
What do you use fire for? Is there something you want to know more about? Leave me a message. I’ll share.

At the end of each year many of us take a few moments to remember successes and failures of the last year, and set goals for a new year.

I, too, have been thinking of the things that happened in 2014 and have thought of some goals for 2015.

After never writing more than a chapter in a novel, I have written first drafts for 2 books and half of another, and, I began this blog, which has been sort of regular. The first book has been rewritten several times, and requires another rewrite before I send it on to an editor, before publishing it. For me, I find this to be successful, extremely so.

In my years as a student, I wrote lots of papers, including a 72 page thesis for my master’s degree, but never was I able to complete even a first draft of a novel. This year I wrote two, plus part of another, and have plans for more.

I guess for an author who isn’t published yet, or who hasn’t managed to complete anything, I’ve done pretty good. I’ve spent lots of hours sitting here, in my chair with the television playing hundreds of movies for my husband, writing all year.

2015 will be my year for publishing! I visited with my artist who will be painting my cover, and by the time I’m ready to publish, she will have a cover for me. Before then, I must do another rewrite, and get an editor to check it out.

My goals are to finish all the books in my Ancient Matriarch set, and see if my other book will become a series. I plan to publish the first book by the end of June, and have others ready shortly after. This means work, work, and more work. I’ll need to work harder, faster, and smarter to get all the books ready in time. I may also need to run a funding program to help pay for my artist and editor.

Additionally, my goal is to publish a blog each Wednesday. That seems to be the best, giving me time to come up with ideas and get it written.

What are your goals for the coming year?

It’s funny how you work so hard on a project, get up every morning, until it’s done. Then you wonder just what you will do with your time.

This has happened to me again today. I finished my Christmas sewing yesterday, got up early to sew the last nightgown, packed everything into boxes and wrapped in lovely wrapping paper, and sent off to grandchildren to open for Christmas.

Today, I woke up and wandered through the house, wondering what I would do with myself in the quiet of the morning. Yes, the Christmas paper litter needs to be picked up, in case we have visitors, and I could bake or make candies, for the same reason. But here I sit. I think I’d rather get back into the writing habit.

I think I’ll start by picking up with my blog and get back into the habit of blogging regularly, once a week. Look for me on Thursday. Then, back to working on my books, yes I have more than one in process. With any luck, next year I can wish you a Merry Christmas as I suggest you buy my books.

But that is next year.

This year, I will simply promise a more regular writing of this blog, and wish you a Merry Christmas, and Happy Holidays. I hope your celebrations are filled with family and joy.