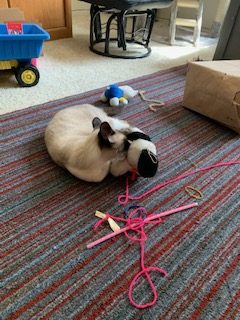 Sparky picks up one of his toys, shakes it, and jumps on my lap.

After a while he take his toy and leaves.

Another day, Sparky brings a toy to my lap once more. I chat with him and ignore the toy. He gives up and jumps down with his toy.

Sparky brings me one of the mouse toys I bought for him. I pick it up and shake it, making the bell ring.

I toss the mouse toy across the room.

Sparky leaps from my lap and chases the toy. He picks it up and drags it back to me, dropping it on my lap.

So I pick it up and and toss it across the floor in another direction.

Sparky chases after it, wherever I toss it, and brings it back to me.

Sometimes he drops it and watches it fall on the floor. He stares at the mouse until I bend over and pick it up.

Who ever heard of a cat playing catch? Dogs play catch, not cats!

He’s brought me that mouse or another every day since then. It’s become one of his favorite games.

Catch. With a cat. Who would have thought?