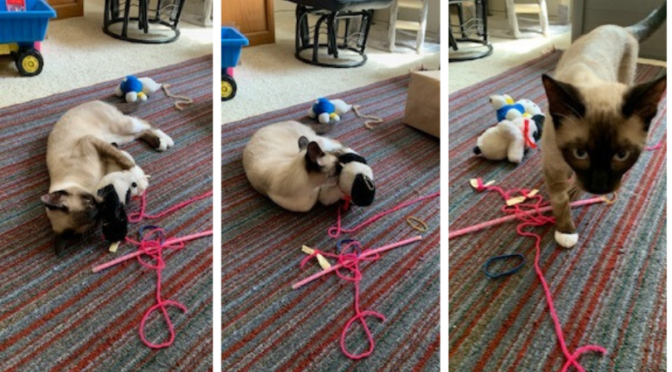 The red dot moves slowly past. Sparky watches as it leaps onto the sofa.

The dot sweeps back to his toes, then off it dances around the room. It bounces up onto the back of the sofa.

He explodes from his crouch leaping and bounding up and across the back, following the dot.

He catches it.
And somehow it slides away from his grasp

He tears after it again.
It eludes his grasp until he plops on the floor, seemingly uninterested.
Until it dances near his nose, his toes, his tail! And he is off, chasing it again.

Thanks to friends who read my blog and made the suggestion, we purchased a red dot laser light. We can now play with him without being scratched and he gets some running in.

My house looks like a 2-year-old lives here again!

Scraps and bits of things I’d never leave on the floor before now lie in wait for Sparky to attack.

Soon after he came to live with us, a stuffed rabbit made its way out of the guest bedroom into the living room. It had been waiting for a granddaughter to return and love on it. Cuddled and tortured, it became one of Sparky’s best friends.

And then the seam split and part of the stuffing came out.

Now the poor bunny waits behind a closet door where Sparky can’t get to it. I need to sew the seam back together.

A strip of paper tied to a length of yarn is a favorite toy, especially when grandchildren come to visit. They drag it around behind them and Sparky chases them. When they are not here, he finds the yarn and wraps up in it.

My bedroom had yarn strung from one end to the other when he found three balls of yarn. It is tangled in a tie and a strap I detached from a purse and left on the floor. When I attempt to untangle the yarn, Sparky is in the middle of it once more.

Like all other cats of all sizes, Sparky loves boxes. His favorite place to play and hide, however, is inside a paper bag. It rattles and makes a noise when he runs into it. It is dark and safe. He can hide there waiting for someone to pass by to be attacked. He plays with them long after they are shredded.

Sparky is smart. He has searched through the toys I have in another room, waiting for grandchildren to come play with them. He has claimed toys from the toy basket: a straw, a stuffed lizard, a plastic man, a piece of string, a big Lego block, anything he can get his paws or his teeth into to carry.

He found two small stuffed animals he loves to play with. One is a little cat, the other is a dog. I think it is fitting that he plays with and attacks the dog.

One morning, I sat writing in my chair. Sparky played with a stuffed animal, the paper tied to yarn, and an elastic.

All of a sudden, he raced past my feet, growling! He ran behind the chairs and around to play with his toys. Away he ran again past me. He stopped to rest. Then, up he jumped and he ran past me at top speed, growling. I think he carried the dog in his mouth.

Where did that big growl come from? He has a loud purr, but I’ve never heard him growl before. He must have decided he’s a big cat again, chasing his prey!

One thought on “Life with Sparky: What Happened to My Clean Floor?”