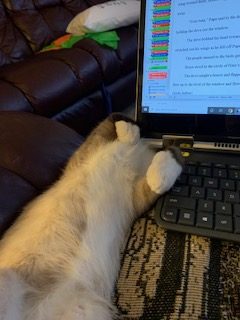 Sparky lies calmly on my lap, sleeping.
Until the phone rings.

It’s my daughter and grandson, calling on FaceTime.

Sparky hears the sound of people he doesn’t know and investigates. He looks in the front, he looks at the back. He doesn’t understand where the sound comes from and who are those people she is talking with?

When he first arrived, he would sit behind my computer. He liked the warmth of it.
But he’d hear my fingers bouncing on the keyboard and peek around.
His paws crept around.
And then, he’d pounce on me!

Later, he decided my keyboard is the place to sleep. He likes to lay on the keyboard close to the screen where he can change the pictures. Before I got a new computer, he managed to turn on the music almost every time.

I never did.
I’m not sure I knew where to do that.

Worst, he thinks his path into the room should include jumping onto my chair, walking across my keyboard, then on over toward Jack. Sometimes, he stops to sleep on Jack’s feet. Other times, he bounces off to play with his toys.

The problem is he always changes the document I’m working on. And when it’s taxes or a book, it can really cause problems. I’m learning to pick up my computer when he jumps up.

It was a big problem when he bumped the power cord out of my computer, and everything went off.
And I lost everything I was working on.
Because the computer battery died.
Good thing my new computer came!

Sometimes Sparky focuses on our television. It sits on a stand. He likes to jump up in front of the television and look at the picture.

He walks around it.
He knocks off the modem …
And the router.