The news is filled with sadness. Good men and women are killed. A police officer was shot and killed when he showed up to investigate an automobile accident. Homes are invaded, robbing and killing the occupants. Angry people decide the only way to solve a problem is with a weapon. Those who are involved in taking the life of another have allowed their soul to become dark somewhere along the way. 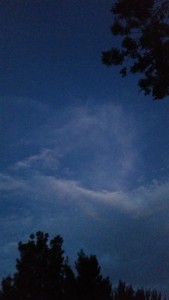 Do you know someone with a darkening soul? Someone you fear to be near for very long?

I am rereading my current work in progress, a spin-off book from the original series called Lost Children of the Prophet. As I read, I found a selection I’d like to share.

A short set up: Two young women, teenagers, are discussing a man at a recent party.

Tawna  felt herself shiver and leaned back in her chair. “He seems so nice, spoke to father, asked to be introduced. We even danced—and he kept his hands to himself. No grasping or groping. It was a pleasure to dance without all that. And you say his soul is black?”

“It’s a show,” Ziv said. “He wants something and act a way to conceal his real intentions.”

Many years ago, in Gibraltar, we met a man we later learned was a murderer. Even our little daughter could tell he had a black soul. I try to stay from that kind of darkness. Better, still, I have felt light in the souls of many others.

Sometimes we have a “gut reaction” to another, immediately loving them, or knowing to be on guard. Is that the color of their soul?

Some people, men and women, have ulterior motives, act nice to your face, while saying nasty things to your back. Politicians are like that, say what they think you want to hear to get your vote. After they are elected, they change, most often, significantly. Do you recognize their darkening souls?

Others souls, too, darken because of their business activities, choosing to pursue success and gain. Forgetting to be of service to others, they do all they can to “climb to the top,” regardless of who is hurt.

Eve’s soul was filled with light, as was her beloved husband, Adam. In contrast, Cain, their son, found his soul darkening as he listened to the destroyer. It blackened, even more, when he chose to kill his brother.

Beware of your own soul. Are you doing something that may darken it? Who have you met with a darker soul? Who do you know who has a soul filled with light? How is yours?