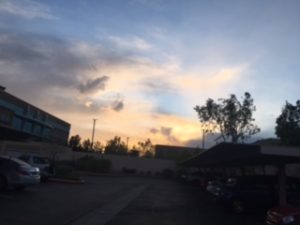 When I taught kindergarten, many years ago, we created lions and lambs on the first of March and talked about the old saying. We decided if the weather was acting like a lamb or a lion. Often, in the Rockies, that weather was snowy and miserable. The children, rightly, determining that the weather was lion-like. It was amazing how many times the saying was right.

At the beginning of the month, it was beautiful and warm here in southern Nevada. The weather was on its way toward 90, much too hot for this time of year. I looked at my husband and asked if he thought the old saw would follow for this year.

Here it is, the end of March and oh, how the lion roars!

The weather forecaster on our local channel warned of overturned semi-trailers, huge dust storms, and uprooted trees last night. We hoped he was wrong, but usually he isn’t.

Around noon, my husband returned to the living room from the end of our apartment facing the west, telling me, “It feels like we are back on Adak.” Adak, Alaska, is a place we lived twice during our sojourn in the U. S. Navy known as the “Birthplace of the Winds”, and well named.

This evening I went outside for something. A gale of cold wind about blew me over! He was right. I love clouds and sunsets, so of course, I had to stop to take a picture. I was nearly blown over!

My kindergartners would have loved it if they had predicted lion weather.

How is it for you? Lion or Lamb?