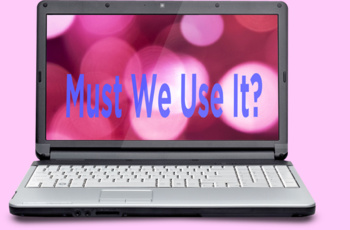 What is with all the bad language and need for sex in everything we see and read lately?

Many of the books I read are very nice books, with good plots and great ideas, until the author decides the F-bomb is required. Authors and others seem to be unable to express emotion without using foul, disgusting language.

Everywhere you turn, in movies, advertisements, television and often stores, banks and shops bad language slips through. Sometimes it’s a word or two, others the air seems to be clouded with the blue of the language.

The F-bomb isn’t the only word that crops up to blue the air. The name of our Savior, in part and in its entirety, explodes from the mouths of babes. Words we considered merely dirty when I was a child are considered appropriate fillers flowing from children, teens and adults. Additionally, sacred names of Gods are reduced to common terms with no respect or honor noted.

I mentioned my concern to my teens a few years ago. They informed me the language heard in R- and X-rated movies was mild compared to what they heard every day in high school. Sadly, this has not improved. The atmosphere is worse in high schools, middle schools, and even elementary schools. During the years I taught it was a constant battle for me to keep the language in my kindergarten class appropriate. Five and six-year-old children spewed dreadful language they heard on television, the playground, and at home.

Many years ago we knew a Marine officer who told us of his command. Junior officers and senior enlisted were expected to control their language. He said intelligent people discipline their more effectively without the use of foul, disgusting, or unholy language. Certainly, if a Marine can do this, everyday people can manage to clean up theirs.

Add to the language that distorts and burns our ears, is the commonness of sexual innuendos. Advertisements of all kinds suggest their products will allow users will make them look, act, or feel sexier. Tight clothing, short skirts, plunging or open necklines are worn by many—anything to suggest an opportunity for the illicit.

There is a general loss of dignity and honor. Good and wholesome words are replaced with slang and filth at every level. Men and women dress themselves and their children as though they are objects to be toyed with rather than beautiful individuals with possibilities for success. Hope is lost. Bad has become good, good is evil. Even the language supports it. When things are wonderful, the word “bad” is spouted.

As I am writing of our first parents in Eve Remembers, I suspect they would be horrified by the use of inappropriate language and the blatant sexuality. In their home, it was not so. But, Adam was a prophet and a seer. He probably saw our day, and was saddened that so many of his children have turned from Father to the Destroyer.

What do you think? Are people around you lazy in their speech, unable to find better ways to express themselves? Or do they uplift the world about them with clean and wholesome words?

What about you authors? Do you litter your writing and foul the mouths of your characters with filth and f-bombs? Or do they find better ways to express themselves?