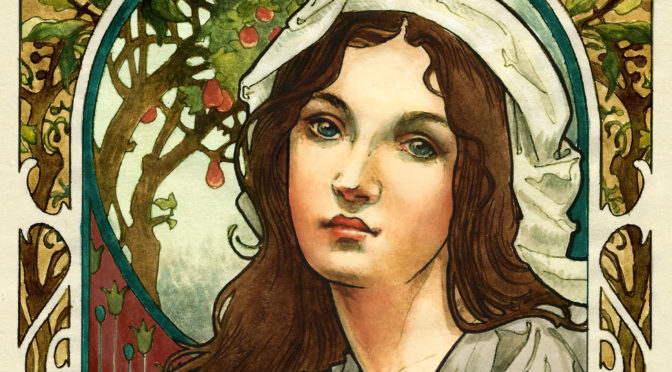 A visit with Eve:

ME: Eve is our first mother, the mother of all living. Through the ages, men have found reasons to say things about her that may or may not be true. In my book, Eve, First Matriarch, I try to set the record straight about this beautiful woman who is mother to all of us.

We have had some questions submitted for you, Eve. Are you ready to answer them?

EVE: I will be happy to answer your questions. I would like all my daughters and sons to know me better.

ME: Okay. First question for you. What was it like to anger God?

EVE: Let’s start with the hard question and get it out of the way!
We were afraid of God’s anger when we partook of that fruit. God had told us we would die if we ate it. I didn’t want to die. Adam didn’t want to die. But we both wanted to be together and have children. We couldn’t know happiness without sorrow. We couldn’t have children without breaking this one commandment.
I was frightened when I heard Father and Jehovah returning to Eden after we ate the fruit. We hid. We feared seeing or speaking to Him.
But, God wasn’t angry with us. He was filled with overwhelming sorrow because there was a better way for us to have moved forward in our progression. Lucifer stepped forward and interrupted it. I was glad not to be in Lucifer’s place that day. Father’s anger came through, though he used a quiet voice to send him from Father’s presence and from Eden. We were all sorrowful that day.

ME: I’m glad I wasn’t there that day. It would be frightening to upset God.
Another question, that goes along with the first:
What was it like to receive God’s forgiveness?

EVE: Father’s forgiveness didn’t come easily. I spent many days on my knees, praying and asking for His forgiveness. I kept remembering the days we spent in Eden. Those were carefree days, no pain, no sickness, and no hunger. But there wasn’t really joy, either.
After the birth of our first child, who Angelique named _, I better understood the forgiveness of a parent for a child. It wasn’t until many years later that I knew for certain that Father had forgiven me. In those years, I remembered my transgression and grieved that I had been so weak as to allow myself to be tricked.
When Adam convinced me that Father had forgiven me, the weight of my guilt lifted. I felt like the weight of many heavy rocks had been lifted from my shoulders. My soul felt as if it could join the clouds floating high in the sky.

ME: I’m glad you were able to feel Father’s forgiveness. It gives me hope that I, too, can be forgiven.
Next question: Is God to be loved or feared? Why or why not?

EVE: That is an easy question. I love Father. He is kind and generous. He is all we can hope for as an example for papas on this earth. He loves His children. He wants what is best for us — all of the time.
We hear Father tell us He is a jealous God. He jealously seeks for us, His children, to find the joy that can only be found in obedience to His commandments. Sadly, people aren’t always willing to obey Him. Father allows those who choose to be disobedient to pay all the consequences of their choices.
Father allows the Destroyer to tempt women and men. When they follow the Destroyer, they are no longer protected by Father. The Destroyer will not support them forever. When they lose the purpose, he allows them to fall into despair.
Those women and men fear Father, for they know they must meet Him in the end and pay the consequences of their actions.

ME: So, God is a loving Father?

ME: Our time is nearly up. I know you have things to do. A reader wants to know if you still like apples.

EVE: Apples? I have always loved apples. Why would your reader want to know about apples?

ME: Men have taught that the forbidden fruit was an apple. Was it?

EVE: (laughing) No. But I am forbidden to tell you which fruit it was. I have to go. I’ll see you again sometime. Maybe I can answer more of your reader’s questions.

Next week we will have a chat with Adam, our ancient father.