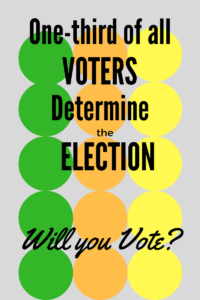 Tuesday is a day of decision—the day many of us will enter our polling booths to cast our vote. Or not. It has been estimated that two-thirds or more who are registered will not take the time or trouble to actually vote. Some will believe their vote doesn’t count. Some believe it won’t matter, due to election fraud. Others can’t find someone to vote for. Others simply can’t be bothered.

I have a friend whose father was a popular elected official, so popular everyone expected him to be reelected. The expectation was so widespread many who supported him did not bother to vote. When the vote was counted, his competitor won by less than ten votes. Just ten friends, ten supporters, ten people who cared enough to take the time to vote would have changed the election and reelected the man.

This scenario has been multiplied many times every year, in all levels, of government, whether you are discussing local or federal elections. If a few hundred more had voted in each of the past elections, the results would be significantly different.

In addition to the big question of the presidential election, most localities have other questions on the ballot. These questions have the ability to significantly change lives in those localities. Some will impose increased taxes. Some may change attitudes about federal laws. Many states question the ability of individuals to use marijuana, either for medical or personal use. Other important questions are on ballots across the country. Those who do not vote will find their lives changes, happily or not

Do not be one of the two-thirds who choose not to vote. It is much too important, this year and every time there is a vote. Your vote makes all the difference, whether you cast it or stay home.