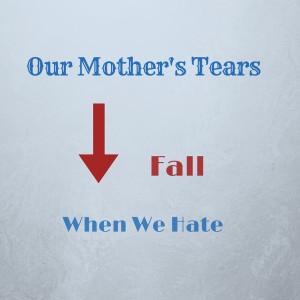 It is easy to fall into the mob mentality, thinking those (fill in the blank) are horrible people and should not live among us. It happened in the 1930s, when Hitler raised his ugly voice suggesting the Jews were non-human, unworthy of the air they breathed. It happened in Africa, those black people didn’t need our support, they are uncivilized. It happens around the world, the unborn need no protection, particularly if they are children of a group of people we consider unnecessary, abort them.

In the United States, the cry has been raised against Catholics, Jews, Mormons, Irish, Italians, Mexicans, other Latinos, Russians, Muslims, and now Syrians. Each group was different, thinking differently, acting differently, looking differently from the majority. Eventually, most of these have integrated into society, and one wonders at those cries of hate.

“Give light, and the darkness will disappear of itself.” —Desiderius Erasmus

Light comes from truth, and truth is found in all religions. It is the darkness, the dark side, if you will, that encourages hatred for others and their beliefs. Walking in the light of truth allows us to be aware of the truth found in what others believe, finding association with the truths you hold dear and those held dear by another.

I know Eve was saddened when her children turned away from the fullness of light as given to them from God. Some of her children could not accept everything, leaving to live good lives with a portion of the light she and Adam offered. Others completely turned their backs on the teachings of their parents, choosing to follow Satan, the father of darkness.

I am certain Eve received reports of wars among her children, brought about by hatred and distrust. One group of people was a little different in belief than another. Over time, I would think Eve has been weighed down by the hatred and ugliness her children have heaped on their brothers and sisters. Many tears fall, even now, because we choose to hate, we choose to fear, we choose to see the differences rather than the similarities.